(IPTG, also known as lad-y) is a molecular biology reagent. This compound is a molecular mimic of allolactose, a lactose metabolite that triggers transcription of the lac operon, and it is therefore used to induce E.coli protein expression where the gene is under the control of the lac operator.

Like allolactose, IPTG binds to the lac repressor and releases the tetrameric repressor from the lac operator in an allosteric manner, thereby allowing the transcription of genes in the lac operon. But unlike allolactose, the sulfur (S) atom creates a chemical bond which is non-hydrolyzable by the cell, preventing the cell from metabolizing or degrading the inducer. The concentration of IPTG therefore remains constant and the expression of lac p/o-controlled genes would not be inhibited during the experiment.

The lac operon is one of the most commonly used systems for creating proteins in E. coli that can then be purified and studied in other experiments. Usually your gene of interest is inserted into a commercial vector (pET vectors are common) that contains: 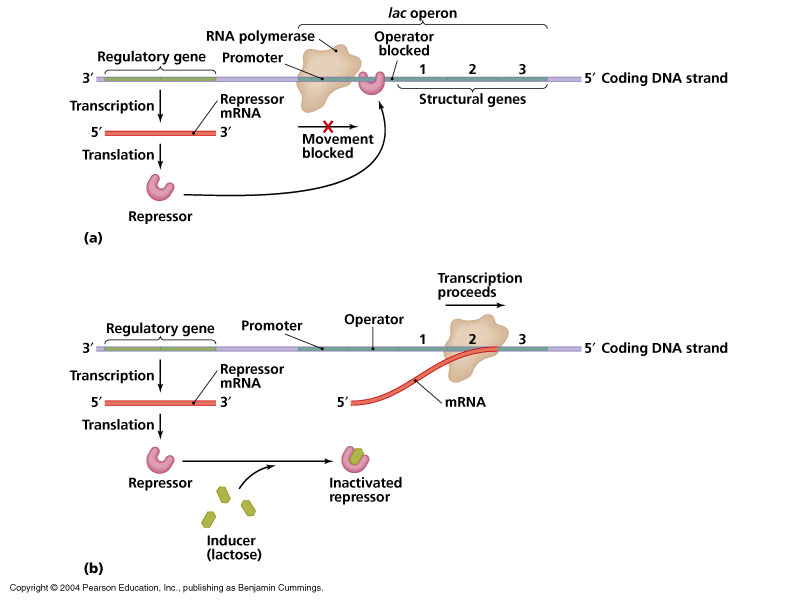 The lac repressor protein (LacI) evolved to sense the presence of lactose (a combined galactose-glucose disaccharide). Both the host chromosome and the insert have copies of the lac repressor gene to ensure that there is always enough LacI protein to titrate all DNA operator sites. In the absence of lactose, the lac repressor binds to the operator sequence on DNA and bends the DNA by 40 degrees. This blocks access of T7 RNA polymerase to the promoter site and thus prevents leaky transcription of your gene before induction.

When lactose binds to LacI it induces a conformational change in the protein structure that renders it incapable of binding to the operator DNA sequence. IPTG is a structural mimic of lactose (it resembles the galactose sugar) that also binds to the lac repressor and induces a similar conformational change that greatly reduces its affinity for DNA. Unlike lactose, IPTG is not part of any metabolic pathways and so will not be broken down or used by the cell. This ensures that the concentration of IPTG added remains constant, making it a more useful inducer of the lac operon than lactose itself.